I think it’s easy for those of us who live in the U.S. to lose sight of the very serious risk that diseases like polio and tetanus pose for kids. Most of these diseases have been eradicated in our country. Few of us have never ever seen a case of polio. Vaccines in the U.S. can seem like an arcane practice for an intangible danger, and fears about harmful side-effects about vaccines drive some parents to avoid them for their own children. I get that.

The reason we get to “not believe in vaccines” today is because we have eradicated many of these crippling and life-threatening diseases in our country. Here’s the kicker: we have vaccines to thank for that. What an incredible privilege to raise our children in a time and place where not many people have seen any of these deadly diseases.

Parents don’t need to go very far to find opposition to vaccination, whether in play groups or online. The Internet is teeming with information on every conceivable choice a parent may encounter. Though suspicion about vaccines is not new, a now widely discredited study published in 1998 linking the measles, mumps and rubella (MMR) vaccine to autism kicked the panic over vaccines into overdrive. 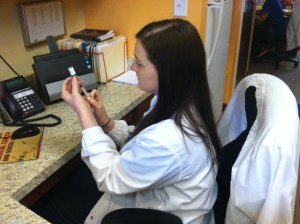 During my training 30 years ago I myself saw numerous kids who were afflicted with the crippling Polio. During my internship in 1998, I saw a child with Diphtheria who ended up dying …I will never forget that sweet one-year-old baby and I cannot ever erase the memory of telling his parents that we could not save him. Today, we routinely administer the Polio, Diphtheria and other vaccines to all babies at the 2, 4, and 6-month visits, and boosters after that.

Prevnar, the vaccine against the pneumococcus bacterium, is one of the greatest pharmaceutical innovations of the past two decades. In children who are vaccinated, it has eliminated most of the pneumonia and meningitis that bacteria cause. It proved so effective, in fact, that fewer pneumococcal infections occur in people over 65 who have never gotten the vaccine, because the germs are no longer circulating. It has, quite simply, changed the world for the better.

In Columbus and Phenix City, pediatricians do not accept “non-vaccinators” or, those parents who refuse to vaccinate their children into their practices. As a pediatrician, I feel bad for the child whose parents choose to not vaccinate…I feel that as a pediatrician I should not abandon the child. However, from a practical standpoint, the non-vaccinators are putting at risk everyone else that they come in contact with. If a pediatrician knowingly allows an unimmunized child into the office, the pediatrician might be liable for that child potentially bringing in a communicable disease and exposing other kids in our office to the disease. A real-life example: Two years ago we had two siblings come to the Fort Mitchell Clinic with Pertussis that was confirmed by lab testing. These unimmunized siblings exposed our staff and doctor to Pertussis, and our staff had to take antibiotics because of the exposure!

As a mom myself, I can certainly understand the desire to protect one’s child from any potential harm. When parents bring up concerns regarding vaccines or the AAP schedule, I encourage them to discuss their anti-vaccination ‘research’ with me. In my role as a pediatrician, I try to empower parents to make informed decisions regarding their children’s health. I want parents to have reliable, complete, and science-based information, so that they can make the best decision for their child about vaccination. Pediatricians most often rely upon the American Academy of Pediatrics for providing reliable information.

Top 5 Questions I am Asked:

Q1: How are the timing and spacing of the shots determined?

A: Each vaccine dose is scheduled using two factors. First, it is scheduled for the age when the body’s immune system will work the best. Second, it is balanced with the need to provide protection to infants and children at the earliest possible age.

Q2: Why are there so many doses?

A: Researchers are always studying how well vaccines work. For many vaccines, three or four doses are needed to fully protect your child. The doses need to be spaced out a certain amount to work the best.

Q3: Why can’t the shots be spread out over a longer period of time? There are 25 shots recommended in the first 15 months of life; why not spread these out over 2 or 3 years?

A: First, you would not want your child to go unprotected that long. Babies are hospitalized and die more often from some diseases, so it is important to vaccinate them as soon as it is safe. Second, the recommended schedule is designed to work best with a child’s immune system at certain ages and at specific times. There is no research to show that a child would be equally protected against diseases with a very different schedule. Also, there is no scientific reason why spreading out the shots would be safer. But we do know that any length of time without immunizations is a time without protection.

Q4: I’ve seen another schedule in a magazine that allows the shots to be spread out.

It was developed by a pediatrician. Why can’t I follow that schedule? My child would still get his immunizations in time for school.

A: There is no scientific basis for such a schedule. No one knows how well it would work to protect your child from diseases. And if many parents in any community decided to follow such a schedule, diseases will be able to spread much more quickly. Also, people who are too sick or too young to receive vaccines are placed at risk when they are around unvaccinated children.

For example, following one alternative schedule would leave children without full polio protection until age 4. Yet, it would take only one case of polio to be brought into the U.S. for the disease to take hold again in this country. This schedule also delays the measles vaccine until age 3. We have already seen outbreaks of measles in some parts of the country because children were not immunized. This is a highly infectious disease that can cause serious harm–even death. The reason we recommend vaccines when we do is because young children are more vulnerable to these diseases.

Q5: Isn’t it overwhelming to a child’s immune system to give so many shots in one visit?

A: Infants and children are exposed to many germs every day just by playing, eating, and breathing. Their immune systems fight those germs, also called antigens, to keep the body healthy. The amount of antigens that children fight every day (2,000-6,000) is much greater than the amount of antigens in any combination of vaccines on the current schedule (150 for the whole schedule). Thus, children’s immune systems are not overwhelmed by vaccines.

So, why would parents not vaccinate?

As mentioned previously, a surge in the anti-vaccine movement can be tied back to the year 1998 and Andrew Jeremy Wakefield, a British former surgeon and medical researcher, best known for his fraudulent 1998 research paper in support of the now discredited claim that there is a link between the administration of the MMR vaccine and the appearance of autism and bowel disease.

In 2010, a statutory tribunal of the British General Medical Council found three dozen charges proven against Wakefield, including counts of dishonesty and the abuse of developmentally challenged children. It was proven that the researcher had misrepresented or altered the medical histories of all 12 of the patients whose cases formed the basis of the 1998 study that linked the MMR vaccine to autism and other diseases.

The Lancet, the world’s leading medical journal, immediately and fully retracted his 1998 publication. It was later found that Wakefield had planned to launch a venture on the back of an MMR vaccination scare that would profit from new medical tests and “litigation driven testing.”

Britain stripped Wakefield of his medical license immediately after the investigation. Meanwhile, the damage to public health continues, fueled by hype and incomplete reporting.

I strongly urge all parents to get their information from reliable scientific resources and not from sources that use anecdotal and non-scientific information. Please call upon your pediatrician as your ‘go to’ person to help you make informed decisions about your child’s vaccinations.

Preferred Medical Group is currently accepting new pediatric patients at our offices in Columbus / Phenix City, Fort Mitchell, and Opelika. In addition to sick and wellness visits, we offer Behavioral Health counselling and ADHD assessments for children. If you have any questions please feel free to contact us directly or schedule your next visit through our convenient online appointment system.