Picture this as a mom: The kids are home for the holidays reenacting a loud Star Wars battle all over the house while intermittently screaming and hitting one another with light sabers. Toys are strewn everywhere, your husband is at work, and company is coming for dinner in 30 minutes—you haven’t even put the turkey in the oven yet! Many moms, at their wits end, might think to scream at their kids, to threaten them that Santa Claus won’t bring them any toys if they don’t behave (see last week’s blog), or even consider throwing them outside into the frigid cold and leaving them there. What you wouldn’t give for a Silent Night.

However, alternative methods are available to handle this situation (and many others). A wealth of psychology research points to positive reinforcement as a very effective strategy for behavior management for children of all ages. Positive reinforcement can be defined as adding something to a situation to make a behavior more likely to happen in the future. For example, if someone compliments me on a new blouse, I am more likely to wear it again. The behavior (wearing the blouse) has been reinforced (made stronger) with the compliment. From infancy to the terrible twos, to those rebellious teenage years, parents can rely on positive reinforcement to help children understand what is expected of them and motivate them to do things they need to do. Rather than define and fuss about all of the things our mom above would like her children to stop doing (running, fighting, and leaving toys out), it will probably be more effective to identify and focus on the desired behaviors (playing quietly, getting along, and picking up after themselves).

Once our mom has identified alternative, positive behaviors, she could use “first…then” statements with her children to focus on one or two key changes she would like to see in their behavior. “First, come to the living room and pick up all of your toys. Then, you can play your favorite board game in your room until it’s time for dinner.” The behavior (picking up toys) has been clearly defined and reinforced with the reward of playing a game. Rather than feeling fear of punishment or anger at our mom, her children will be more likely to feel positive about their relationship because mom is offering something fun as a reward instead of threatening to take things away. Our mom also benefits because she is less likely to have to yell or decide whether she is really going to follow through on those threats to ban Santa this year.

Tip: Follow up by acknowledging your kids’ good behavior

A next key step to keeping the good behavior going is to follow up. As soon as the children begin to follow her instructions, our mom should walk into the living room and verbally acknowledge their efforts. “You all are doing such a good job cleaning up. Thank you for picking up your toys,” she may say. Then, when they go off to play the game, she should check in again and thank them for playing quietly together. These positive reinforcements will encourage the children to repeat the desired behaviors. 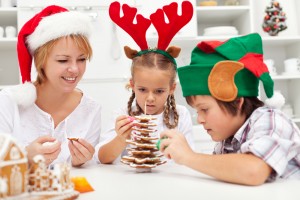 Another common problem over the winter break is boredom. Kids aren’t used to being cooped up in the house for days on end, and parents aren’t used to being around their school-aged children 24/7. I encourage families to plan out age-appropriate activities (both as a family and individually) in advance. By again making expectations clear, preparation can help head off boredom and the fights and mischief that come with it. For example, one child may want to watch TV, and another child may want to paint a picture. To head off a potential conflict, a parent could suggest allowing each child to take a turn picking an activity. In addition to reducing conflict and boredom, this example also reinforces taking turns because Child A is rewarded for letting Child B have a turn to choose by getting to make his/her own choice next.

Also during the holidays, families are often cooped up together in a car for hours on end as they travel to Grandma’s for Christmas dinner. This can pose a challenge for young children – especially those with siblings– as boredom will inevitably arise and fights may break out. Most children are well behaved during the first five minutes after you load up into the car, so I would advise parents to comment on these behaviors within that time frame to reinforce what they would like to see throughout the duration of the trip. Dad could say, “I like how you guys are being so quiet.” If an argument does begin to break out, parents can emphasize the positive behaviors they do see, such as commenting on how the children are keeping their hands to themselves. Parents should encourage conflict resolution between the children to an extent—but they should also state that they are available for help and guidance if the children cannot solve the problem on their own. Again, advance preparation can head off many potential conflicts in the car. By stocking up on DVDs, video games, or other activities for the car ride, children are less apt to be bored and get into conflicts with their siblings. 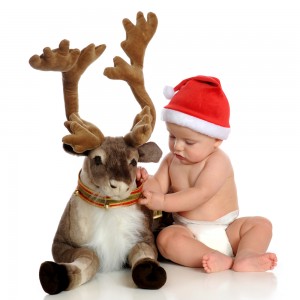 In conclusion, positive reinforcement adds something to a situation to make the behavior more likely to occur again. In the scenarios above, parents were often adding positive comments when the children were behaving well. Other ideas could be to give them small treats for positive behaviors, just as you might earn a bonus at work for performing exceptionally well. This is not to be confused with a bribe, but rather a reward for good behavior. These rewards do not have to be expensive. If children have done well playing independently while you catch up on housework, it might be nice to offer some one-on-one time with mom. Or, if they have been polite during a long (perhaps boring) visit with an elderly relative, you could offer to take them to Santa’s Village one evening as a special way of saying “thank you.” Adding small rewards like these will make children more likely to behave in those ways again.

I wish your family a happy and POSITIVE holiday season. Next week, one of our pediatricians will tell you a little bit about managing sugar intake so the kids aren’t bouncing off the walls while opening presents. After too many candy canes and chocolate snowmen, all of the positive reinforcement strategies in the world may not be able to calm them down!

This blog was first published on http://www.muscogeemoms.com

At Preferred Medical Group, we are committed to keeping our patients and staff safe during the COVID-19 pandemic.
We will continue to see patients at this time as we are taking appropriate measures to disinfect and clean surfaces thoroughly after each appointment.