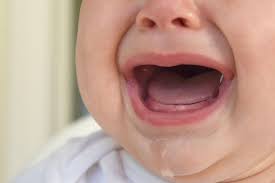 So your little munchkin has just started sleeping longer through the night and you’re catching up on those lost hours of sleep and then suddenly: boom! The irritability, drooling and staying up through the night begins all over again! Your baby has officially started teething and especially as a first time parent; you aren’t sure where to start.

With so many options available and all the advice showered by other moms, grandmas and friends, it is very easy to get confused about where to start and what to give to your little one to help him out with the teething process. For starters, say NO to the following:

Teething jewelry: Necklaces and bracelets are being marketed a lot and I see babies wearing them way too often. These are usually made of amber, wood, silicone or marble. There is a high risk of choking and strangulation with such objects and it is a huge hazard for your baby. If your baby is teething, they are at the age where they do not like to stay still. There have been reports of toddler deaths by the necklaces being wrapped too tightly around the neck during naps due to constantly rolling over/moving around. The necklaces can also get caught on cribs and lead to tightening. I have personally witnessed babies almost choking on the beads due to them easily becoming loose. Please avoid these at all costs- they are not worth risking your little ones’ safety.

Teething gels/sprays: These include gels like Anbesol, Baby Orajel, Cepacol, Chloraseptic, Hurricaine, Orabase, Orajel, and Topex. These gels have an anesthetic called benzocaine which numbs the superficial skin. I, like most other pediatricians have never been a fan of these gels and recommend against it. Benzocaine in large amounts can cause a life-threatening condition called methemoglobinemia which affects the oxygen carrying capacity of red blood cells. It has also been known to numb the throat of babies, causing difficulty in swallowing and a risk of choking episodes. More so, it does not stay on the gums long enough to act on the swollen gums, since it is washed away by the saliva almost seconds after being applied. Why would we want to give our babies something that doesn’t necessarily help them and might even hurt them?

Liquid teething rings: Teething rings are okay to use, as long as they are solid only! Teething rings with liquid in it should be avoided due to concerns of bacteria growing in the liquid and the babies biting through the ring and into the liquid. If you are not aware of what exactly is in the ring, do not give it to your baby.

Teething tablets: These may seem safe since they’re marketed as “Homeopathic” or “organic”. These can however be deadly since one of the components Belladona (deadly nightshade) is actually a plant poison and is known to be toxic to children. The amount of belladonna in these tablets was found to be inconsistent and in larger amounts in the tablets than marketed. The teething tablets by Hylands and CVS have been recalled by the FDA and are not considered safe.

How can I help my baby get through teething?

The process of teething results in a strong desire to constantly chew on something. It can make your baby’s gums very swollen and tender and may cause a fever up to 101F/38.3C. The trick is to find something for the little gnawer that’s cool to touch but tough to chew on.

Wet wash cloths chilled in the freezer, frozen bananas or berries, massaging their gums with clean fingers and letting the baby gnaw on your fingers ( as long as the teeth haven’t come in!)  are some tried and tested ways that work well. Solid teething rings are a good option and may be cooled, but not frozen (since freezing can make them too hard to chew on) Toys and rings that are made of silicone or latex are preferred over plastic due to the harmful effects of BPA/phytates from the plastic.

If none of the above methods seem to be working and you’re reaching for that bottle of medicine- make sure that you discuss the right dose with your pediatrician. Tylenol can be given at any change and Motrin may be given at 6 months or older.

Success! My baby has one tooth- Now what?

Yay! All those nights of soothing your young one finally paid off and you see the fruit of your hard work- the lower incisors! Now that we’ve made it this far, it’s important to take care of these newly hatched pearls: You can start brushing your child’s teeth as early as the 1st tooth erupts. Use a soft kid’s toothbrush with a fluoride toothpaste the size of a rice grain. Say no to bottles in the bed which can lead to milk accumulating around the teeth and causing decay.

When should you worry:

Most babies will have at least 1 tooth by 12 months of age, at which age they can get established with a dentist for routine check ups. If your baby has not had their first tooth by 15 months of age, they will more than likely have to see a Pediatric dentist for evaluation.

Breathe! Teething is a developmental milestone; just like hundreds of others that lie ahead of you -so lets treat it like one. It is one of those situations which you do not necessarily have to act on- let your infant go through the process as is, if he’s not uncomfortable. If your baby is uncomfortable, ease the discomfort with the simple tried and tested; easily available options mentioned above.